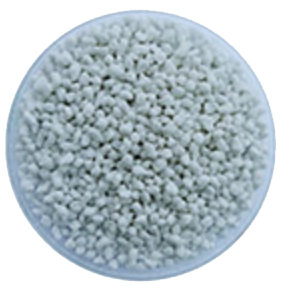 
Fertilizer-grade Ammonium Chloride usually contains 25% N. Some of its advantages include a higher N concentration than (NH4)2SO4 and superiority over (NH4)2SO4 for rice. Ammonium chloride is an excellent source of both N and Cl- for coconut, oil palm, and kiwifruit, which are Cl responsive crops. Ammonium chloride is as acid forming as (NH4)2SO4 per unit of N, and this effect is undesirable in acidic soil, especially if liming costs are excessive. Other shortcomings are its low N analysis in comparison to urea or NH4NO3, and its high Cl- content limits its use to tolerant crops.